Today we had the great pleasure of welcoming knitwear designer Amanda Jones to speak to the Bath Knitting & Crochet Guild.  Amanda has been working as a knitwear designer for 30 years and her work regularly features in The Knitter, Simply Knitting and Knitting Magazine.

Amanda’s path to a design career started many years ago… as a girlie girl, with four brothers, she  learnt to sew before she started school and would make clothes for her dolls.  She learnt to knit when she was 7 and her first garment was a cardigan for her teddy bear, complete with raglan sleeves!  Amanda would visit the Fashion Museum in Bath and then replicate what she’d seen at the museum at home – a sure sign of things to come.

At Art College Amanda found her place and loved designing and creating, and felt herself gravitating to making texture.  Amanda had been favouring crochet over knitting (a skill she learnt aged 9) as it grew faster.  However, a desire to own a very-fashionable-but-expensive (ready made) Mohair jumper in her first year studying sent Amanda into the local yarn store to buy wool and needles… and there was no looking back, she was in the knitting zone again and knitting “became her thing”.

Amanda admits to getting bored with plain stocking stitch; her work has to be colourful and interesting, both to look at and to touch.  This is evident in her final collection of Riviera beach styled garments from 1982. 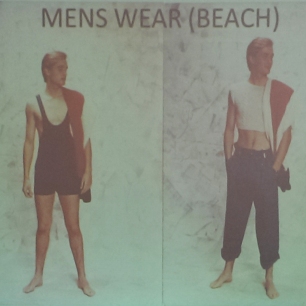 After college Amanda moved to London.  She needed a break from the all-consuming study she’d just completed and worked in Harrods.  During this time Amanda started designing and selling her own childrenswear range, and the collections were popular with smaller independent stores in London.  Amanda would often sell the collections to overseas outlets when she travelled as well.

From here Amanda was introduced to the world of designing and writing for knitting magazines and wool companies, and this is what she would spend much of the 1980s working on.

After a break from designing to have a family, Amanda was approached by a wool producer in Yeo Valley asking “can you do anything with our wool?”.  She went on to dye it, design with it and sell it, all organically.

For the past decade Amanda has been working with the knitting magazine titles Simply Knitting, The Knitter and Knitting Magazine.  She also runs workshops locally and at the Knitting & Stitching Show.

The design process for working with a magazine follows a similar routine for each title.  The magazine will tell Amanda what they’re looking for, the skill level of the audience, and will provide a mood board and often samples or suggestions of yarn to use.  Sketches and, sometimes, swatches are sent off to the magazines to be considered.  If a design is commissioned, Amanda and her knitters will work to complete the design and pattern. 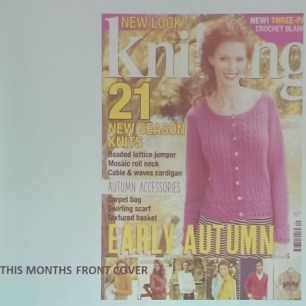 Amanda’s top tip for knitters is to ALWAYS knit a tension swatch. Every knitter’s tension is different, and the yarn and the needles you use also have an impact.  For garments with various stitches used, Amanda will make up a swatch for each stitch.  From here she creates the charts for the pattern – originally done on graph paper by hand, she now uses Stitchmastery. 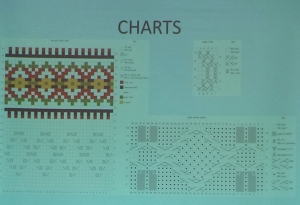 The session ended with a few questions from the floor before looking at the lovely knitwear and portfolios of Amanda’s work.  The questions that stick in my mind are “do you ever see the final image in a magazine and think that’s not what I designed?” and the answer was a resounding “YES!”, and “what inspires your work?” to which Amanda replied “inspiration comes from all around”.  A fantastic morning and a great sentiment to close with. 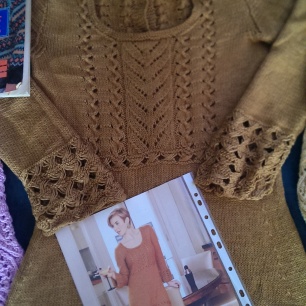 If you’d like to see more of Amanda’s work, check out her Ravelry page!